Veritas Forum: Is There Truth Beyond Science? 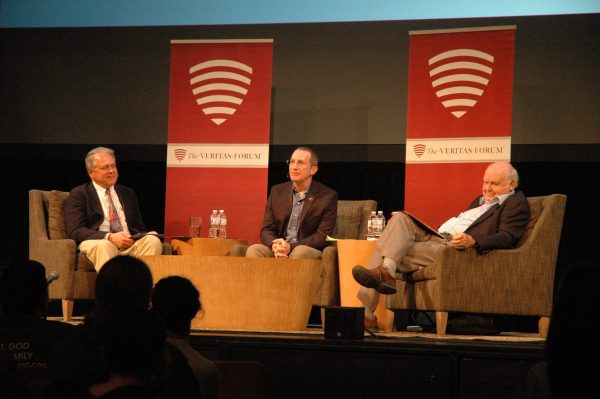 Is there truth beyond science? Can science and faith work together? Does faith overstep the bounds of scientific inquiry? Does science intrude on matters of faith?

A dialogue with Dr. John Lennox, a Christian Mathematician at Oxford University, and Dr. Larry Shapiro, an atheist Philosopher at the University of Wisconsin-Madison, where they will discuss the coexistence, intersection, and compatibility of science and religion. The discussion will be moderated by Dr. Jeff Hardin, Professor and Chair of Integrative Biology at University of Wisconsin-Madison, followed by an opportunity for Q & A.

An after party/reception will immediately follow the event at Upper House (365 East Campus Mall, Suite 200) with free refreshments, so students and other University guests can continue the conversation.

This event is brought to you by The Veritas Forum, in local partnership with Badger Catholic, Badger Cru, Blackhawk Church College-Age Ministry, Chi-Alpha, InterVarsity Graduate Christian Fellowship, The Navigators, and Upper House. Funded in part by an Associated Students of Madison (ASM) viewpoint neutral grant.

This event is further supported by the Atheists, Humanistis, and Agnostiscs @ UW-Madison, the Department of Philosophy, the Department of Integrative Biology, and the Religious Studies Program at the University of Wisconsin-Madison.

The Veritas Forum helps students and faculty ask life’s hardest questions. Many of the world’s leading universities were founded to answer the big “why” questions. The mission of Veritas is to help them confront these questions anew. Students, faculty, and chaplains at Harvard University planned the first Veritas Forum in 1992. Since then, over 200 universities in North America and Europe have hosted over 2,000 Forums. The Veritas Forum is committed to courageous conversations, placing the historic Christian faith in dialogue with other beliefs and inviting participants from all backgrounds to pursue truth together.

Dr. John Lennox, Professor of Mathematics (emeritus) at University of Oxford, is an internationally renowned speaker on the interface of science, philosophy, and religion. He is also a Fellow in Mathematics and the Philosophy of Science at Green Templeton College, Oxford. John has lectured extensively in North America, Eastern and Western Europe, and Australasia on mathematics, the philosophy of science, and the intellectual defense of Christianity. He has written a number of books on the interface between science, philosophy and theology, including God’s Undertaker: Has Science Buried God? (2009), God and Stephen Hawking, a response to The Grand Design (2011), Gunning for God, on the new atheism (2011), and Seven Days that Divide the World, on the early chapters of Genesis (2011). In addition, he has participated in public discussions with many academics on campuses around the world such as Richard Dawkins, Christopher Hitchens, and Peter Singer.

Dr. Larry Shapiro is a Professor of Philosophy at the University of Wisconsin-Madison, having received his Ph.D. from the University of Pennsylvania. His research spans philosophy of mind and philosophy of psychology, but he has a growing interest in philosophy of religion. A recent result of this interest is his book, The Miracle Myth: Why Belief in the Resurrection and Supernatural is Unjustified (Columbia, 2016), which explains in simple terms why beliefs about incredibly unlikely events, such as miracles, face a special justificatory burden that (he argues) is not met in the case of miracles. Relatedly, Shapiro’s current research proposal aims to examine how both scientists and Christians misuse science to answer the Big Questions. His other published works include The Mind Incarnate (MIT Press, 2004), the award-winning Embodied Cognition (Routledge, 2011) and The Multiple Realization Book (co-authored with Professor Thomas Polger, Oxford University Press, 2016).

Dr. Jeff Hardin is Professor and Chair of Integrative Biology at the University of Wisconsin-Madison. He holds a Ph.D. in Biophysics from the University of California, Berkeley, and an M.Div. from the International School of Theology. His numerous research articles focus on the genetic regulation of cell movement and cell adhesion during embryonic development, which has broad implications for understanding human birth defects and cancer. He is also a nationally and internationally recognized biology educator, and the senior author of a widely used cell biology textbook, The World of the Cell (Pearson). Hardin is the only scientist in the Religious Studies program at the University of Wisconsin-Madison, where he is the director of the Isthmus Society, which is committed to promoting dialogue between science and religion.