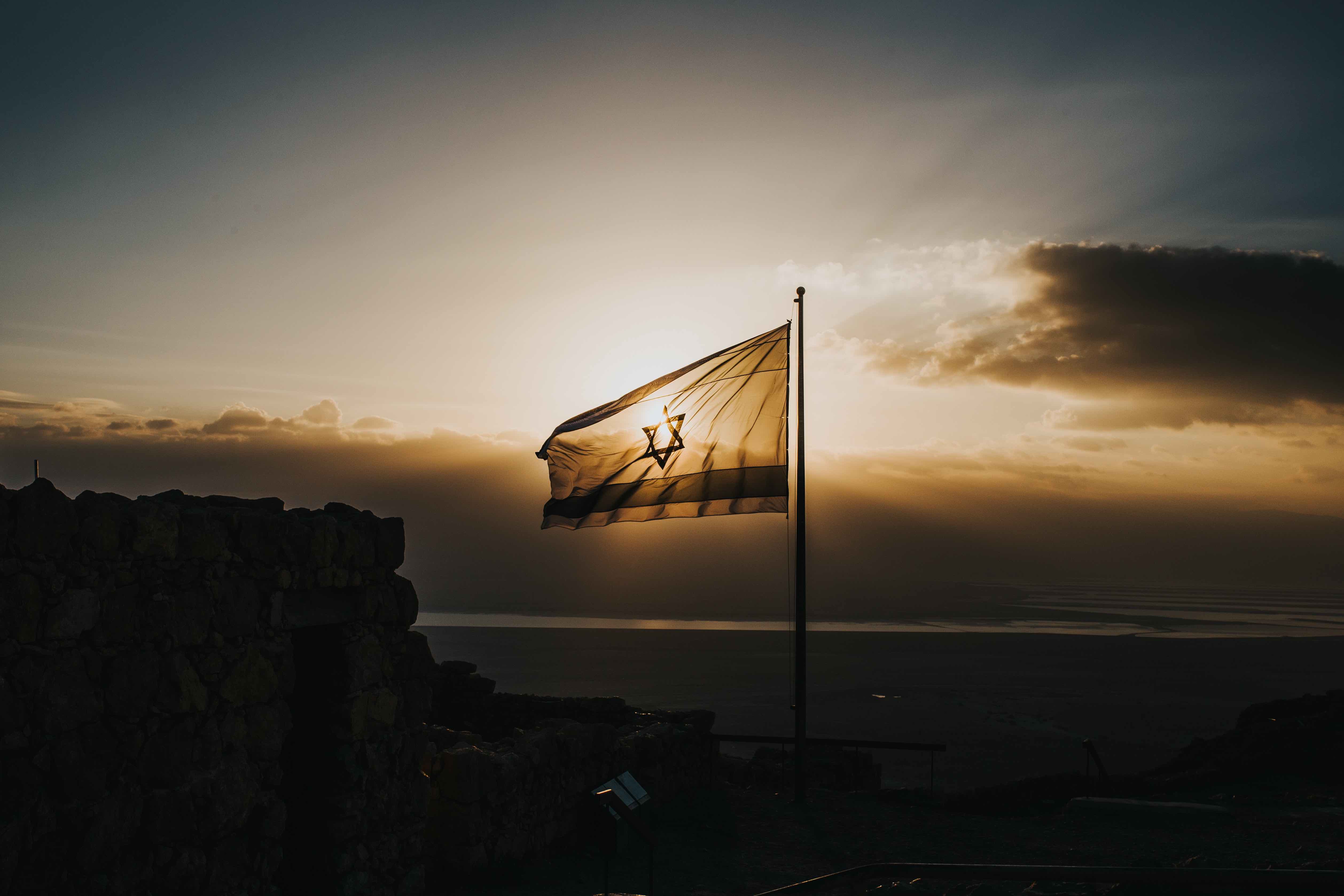 Protestants have long been fascinated with Jews, Judaism, and Zionism, dating to the sixteenth century...Why is it only in the last 70 years or so that American evangelicals have organized on a large scale to support and engage with Jews? - Dan Hummel, Ph.D.

U.S.-Israeli relations often grab the headlines. Politically, culturally, and religiously, this relationship is “loaded,” complicated, and confusing—especially when first-hand knowledge of the issues is scant. In the U.S., though, some evangelical communities are ardently committed to supporting Israel. Some go so far as to identify themselves as Christian Zionists. How did these commitments come to be as strong as they are? What are the implications in economic, policy, and spiritual terms?

These are some of the questions we will address at Upper House on October 30, when author Daniel G. Hummel, a historian and Upper House Program Curator, will talk about his highly-reviewed book, Covenant Brothers: Evangelicals, Jews, and U.S.-Israeli Relations (University of Pennsylvania Press, 2019). In anticipation of that gathering, Upper House’s Susan Smetzer-Anderson interviewed Dan to learn more about his research and ways it might help us interpret current events and interact with ardent supporters of Israel.

Susan: Dan, your book has been praised for being thoroughly researched and insightful about relations that are often poorly understood. What first sparked your interest in the Middle East and evangelical support of Israel?

Dan: I grew up in an evangelical household, where I read the Left Behind novels and other popular books that were imbued with a reverence for the state of Israel. That said, I wasn’t especially interested in Israel then. But I did find American foreign policy interesting, especially as I absorbed the attacks of September 11, 2001, during high school. I am wired as a scholar and want to understand the historical underpinnings of current events. That led me to study foreign policy and the Middle East, and I went on to earn a master’s degree in Middle East history from Colorado State University and then a Ph.D. in U.S. foreign relations at UW-Madison.

It was during my Ph.D. program that I did a deep dive into the topic of evangelical-Israel relations and Christian Zionism—a topic that allowed me to draw on both my personal knowledge of evangelical culture and interest in U.S. foreign relations. Plus, UW has amazing resources for graduate students who want to study in Israel, including the George L. Mosse Program.

Susan: Before we get into discussing the meat of your book, I’d like to ask—outright—if you see yourself as an activist on U.S.-Israeli relations?

Dan: I really see myself as a scholar. While I have my own Christian faith commitments and views on U.S. foreign policy and the Arab-Israeli conflict, my driving goal is to understand the ways evangelicals have organized themselves to support the state of Israel—and to more clearly explain the ways evangelicalism has changed in the twentieth century as its engagement with Israel has evolved. In my writing I have a lot of implicit criticisms of Christian Zionist rhetoric—of the way its leaders articulate theology, define themselves against other Christians, and marginalize Arab Christians. But these critiques are embedded in my effort to understand and describe how we got where we are today, politically and culturally.

Susan: What have you learned through your research about evangelical support for Israel?

Dan: First, I want to point out that how evangelicals have actually organized and acted in support of Israel is different than merely expressing interest or fascination with Israel. Protestants have long been fascinated with Jews, Judaism, and Zionism, dating to the sixteenth century. In evangelicalism, this interest has often been expressed through evangelizing (trying to convert) Jews to Christianity or elaborating on end times— apocalyptic scenarios—that feature Jews and Israel at the center. But these are centuries old elements of evangelicalism. So, I found myself asking: Why is it only in the last 70 years or so that American evangelicals have organized on a large scale to support and engage with Jews?

Certainly, the establishment of the State of Israel in 1948 is a propelling agent. That and the connecting role American Jewish organizations played, historically, between evangelicals and the state of Israel—these are integral to explaining our current moment. There’s also the confluence of post-Holocaust theology and interfaith efforts after 1945; support for Israel is interwoven in different ways in these developments. Another influence since the 1970s is the organizing of a politically potent Christian right in American politics. While evangelicals have always been interested in politics, they haven’t always been organized.

As I researched all these influences and engaged with the excellent scholarship already out there (by historians like Yaakov Ariel and Matt Sutton, and anthropologists like Faydra Shapiro and Sean Durbin), I was able to trace—and finally tell—a more cohesive story about how successive generations of evangelicals have worked alongside Israeli officials and American Jewish allies to create the significant and influential political interest group or lobby we see at work today. This is the story that is central to my book.

Susan: How did you go about researching this subject? I imagine people might be surprised at the amount of time and effort it took.

Dan: I started my Ph.D. research in 2010 and began learning Modern Hebrew the same year. I spent 2012-2013 at the Hebrew University in Jerusalem as a Mosse Fellow. That year I conducted archival research in the Israel State Archives and at Christian organizations in Israel. After graduating from UW in 2016, I compiled my research into a book as a postdoctoral fellow at Harvard University and then the UW Institute for Research in the Humanities. In 2019, my book was published by University of Pennsylvania press. So, nine years went into this work, from archival research to finish.

Archival research is like digging for treasure. It is fascinating, daunting, and labor-intensive. I spent a lot of time reading Hebrew reports written by Israeli officials who toured American seminaries after 1967; they wrote in-depth commentaries on Christianity, Christian institutions, and potential for relationship-building. I also spent a lot of time looking at collected volumes of interfaith dialogues that began in the late 1960s—including the first dialogues that occurred between American Jewish representatives and representatives of the Southern Baptist Convention. There are also incredible records at the American Jewish Archives about Billy Graham’s first official meeting with Jewish leaders at the American Jewish Committee headquarters in New York. The more you read the more you find, and the more leads you have to pursue. And there’s plenty of material for others to research!

Susan: So, while you were in the archives, did you find anything surprising or entertaining?

Dan: Definitely! For example, the tourism ads created in the 1970s by Israel—to appeal to American evangelicals—were fascinating. These ranged from 1970s retro color advertisements that promised luxury and relaxation, to radio ads for the American Midwest market that tried to mimic evangelical ways of talking about spiritual renewal. Some of it was pretty hackneyed!

But an important surprise was seeing the intense involvement of the Israeli government—especially its Foreign Ministry and Ministry of Tourism—in reaching out to evangelicals, beginning in the 1950s and deepening after 1967. As I reconstructed the archival record, I saw how the Israeli government was a decisive force in connecting evangelicals to the politics of U.S. support for Israel, connecting pro-Israel evangelicals to each other, and ultimately in shaping what we see today as the global Christian Zionist movement.

Susan: In a nutshell, what is Christian Zionism and is it peculiar to America?

For the purposes of my research, I define Christian Zionism as the organized political and theological effort by conservative Protestants to support the state of Israel.

I usually prefer to add on two modifiers, though these make for a mouthful to say. I like to add the modifier “modern” before Christian Zionism to delineate that I am talking about the twentieth century, and mostly after 1948. I also like to add “movement” after Christian Zionism to indicate that I am interested in organized political and religious action, which is different than the much larger categories of evangelical writing and thinking about Jews, Israel, or Jewish-Christian relations.

My operating definition is narrower than many other scholars, who rightly track similar Christian politics and theology among Catholics and other Protestants, in the United States and elsewhere, or who center on evangelical apocalyptic literature or philosemitism. My interest is in the U.S.-Israel relationship and Christian Zionism, which contained (in productive ways, I think) my focus. But today there are Christian Zionists in virtually every country, and the ones outside of North America and Europe vastly outnumber those inside. I end the book with a chapter on “global Christian Zionism” and sketch how, while much of the modern movement has its roots in American evangelicalism, its future is in the Global South.

Susan: Now a question that every author dreads. What criticism, if any, have you received about your research?

Dan: Oh boy! Writing and talking about such a contentious issue means there is unavoidable criticism. I would say the two main critiques have been that: (1) I don’t decisively judge the goodness or badness of Christian Zionism, and (2) I don’t give enough historical voice to the critics of Christian Zionism.

When it comes to not expressing a personal judgment about the goodness or badness of Christian Zionism, I basically chose from the beginning to adopt a scholarly, dispassionate approach, if for no other reason than much of what writing exists is produced by insiders or vocal critics. The book lays out, in narrative form, discernable critiques of Christian Zionism (even as I recognize some of the insights offered over the years by leaders like Billy Graham). Readers are smart, I think, and quite capable of drawing their own judgments.

While I’ve been criticized for not giving enough historical voice to critics of Christian Zionism, I made an editorial decision to feature the critiques I thought would resonate with Christian Zionists themselves, or criticisms that meet Christian Zionists on their own turf, so to speak. For example, I featured critics of evolving Christian Zionist approaches to evangelization and the underlying theology of “Judeo-Christianity.” I also highlight criticisms of their novel ways of invoking American exceptionalism and rationales used to justify support of Israel—such as prosperity-based theology and stark clash-of-civilization views of the world. I do highlight non-evangelical critics, including Palestinian Christians and critical Jewish voices, though not enough to everyone’s liking.

Susan: What type of talk—and what type of takeaway—do you hope Upper House attendees experience on October 30?

Of course, I’m looking forward to presenting some of the main insights of the book, but I am also anticipating sharing something people might not expect—that is, the importance of physical travel and movement in creating modern Christian Zionism. Each chapter in the book begins within a vignette about someone arriving in a foreign or culturally alien space. Usually this is an evangelical touching down (or, before the 1960s, arriving by boat) in Israel. So, my talk will use this motif of movement and arrival in Israel as we engage with the history of Christian Zionism and key turning points in the story since 1948.

By the end I hope attendees will have a better appreciation for the historical forces shaping contemporary Christian Zionism. I hope everyone will be better able to articulate their views on the movement and on how Christians might relate to the state of Israel—as they encounter these complicated issues in the news they read and the company they keep.